Meet the Veterinarians & Team of Williamsburg Veterinary Hospital in Kitchener, ON! We’re pleased to provide exceptional vet care for your pets!

Dr. Anne graduated from the Ontario Veterinary College in 1998, and she established the Williamsburg Veterinary Hospital in 2005. Although she enjoys all aspects of veterinary medicine, her special interests include internal medicine, pain management and behaviour. Her pets include two cats: Chandler Bing and Sushi. 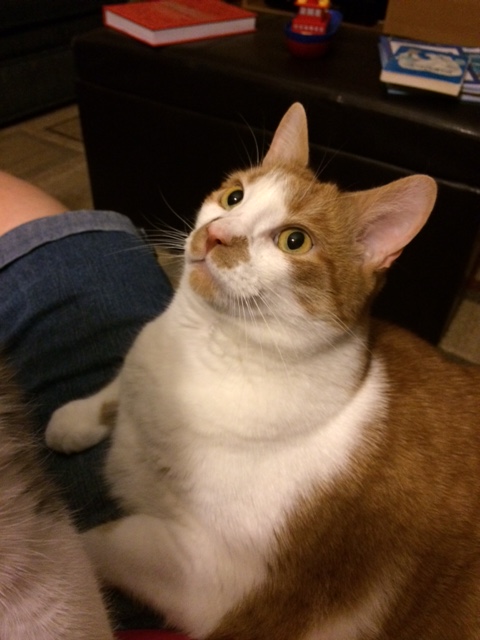 After her undergraduate degree, Dr. Steph went on to complete a Master of Science in Biomedical Science at the University of Guelph in 2011.   She recently completed her Doctor of Veterinary Medicine degree at the Ontario Veterinary College and joined our team here in 2017.    She has a special interest in pathology, histology, cytology and reptile medicine.    Since we only practice medicine on cats and dogs at WVH, she gets her “reptile fix” by caring for her six leopard geckos at home.   She also shares her home with her two dogs, Bradley & Billy and her one-eyed rescue kitten, Lily. 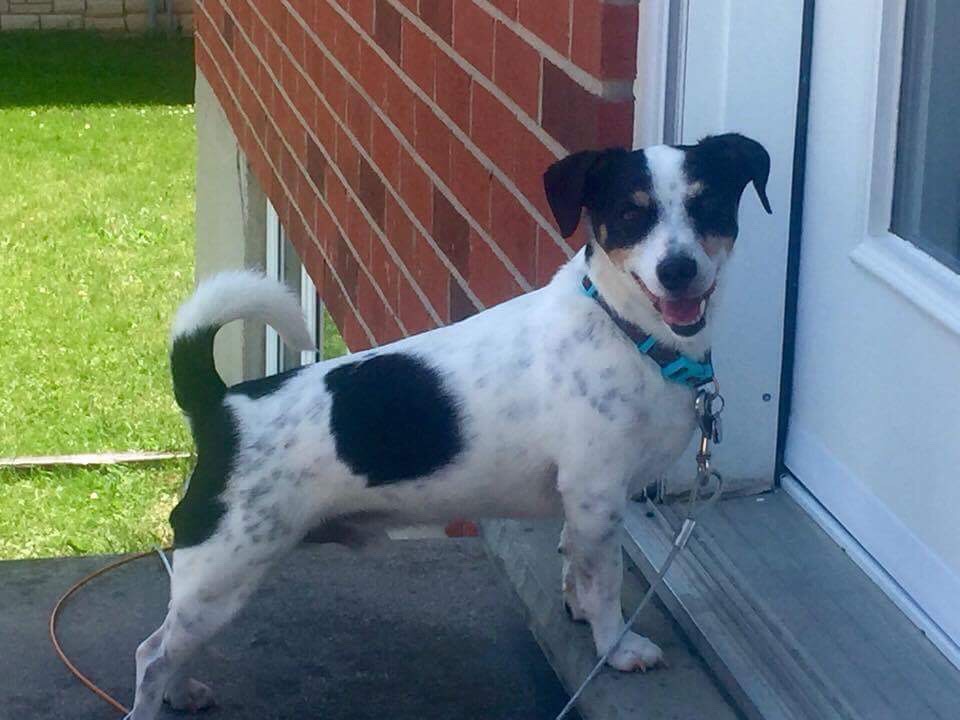 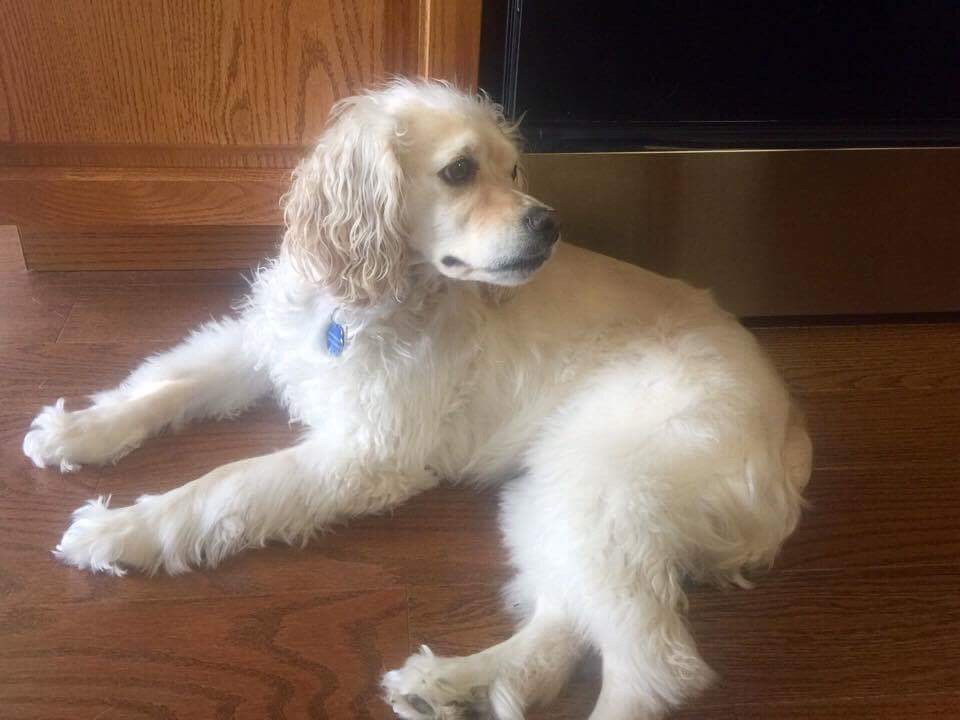 Dr. Angela graduated from the Ontario Veterinary College in 2007 and joined the team at WVH in 2020.  Angela enjoys all aspects of being a veterinarian and loves to work with pets and their owners to strengthen the human animal bond.  She has a special interest in surgery, cardiology, and preventive medicine.  When Dr. Angela is not working, she is busy with her twins and her two cats, Jackson and Johnny Cash.

Dayna graduated from Seneca College in 1998. In addition to her role as an RVT, Dayna is the Hospital Manager. She has been with the WVH team since day one! Her special interests are client relations, laboratory procedures and providing in-hospital/intensive care to our patients. She also holds a special place in her heart for the unhappy feline visitors, and works hard to make their experience as stress-free as possible.

And the newest addition Otis.   He was supposed to be a temporary houseguest…but quickly won over Dayna’s heart with his very sweet & affectionate nature with people…despite how grumpy his face tends to look! 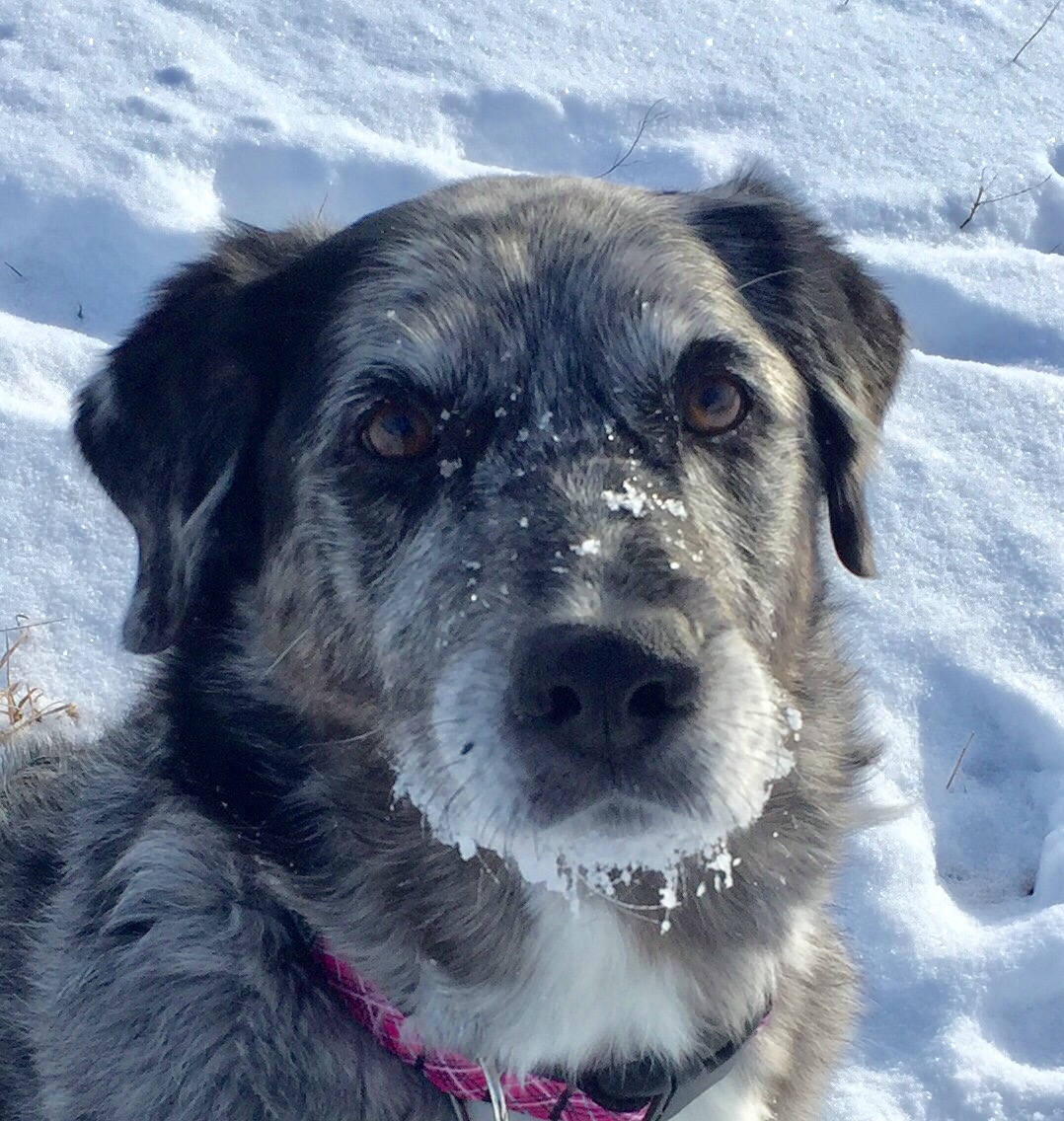 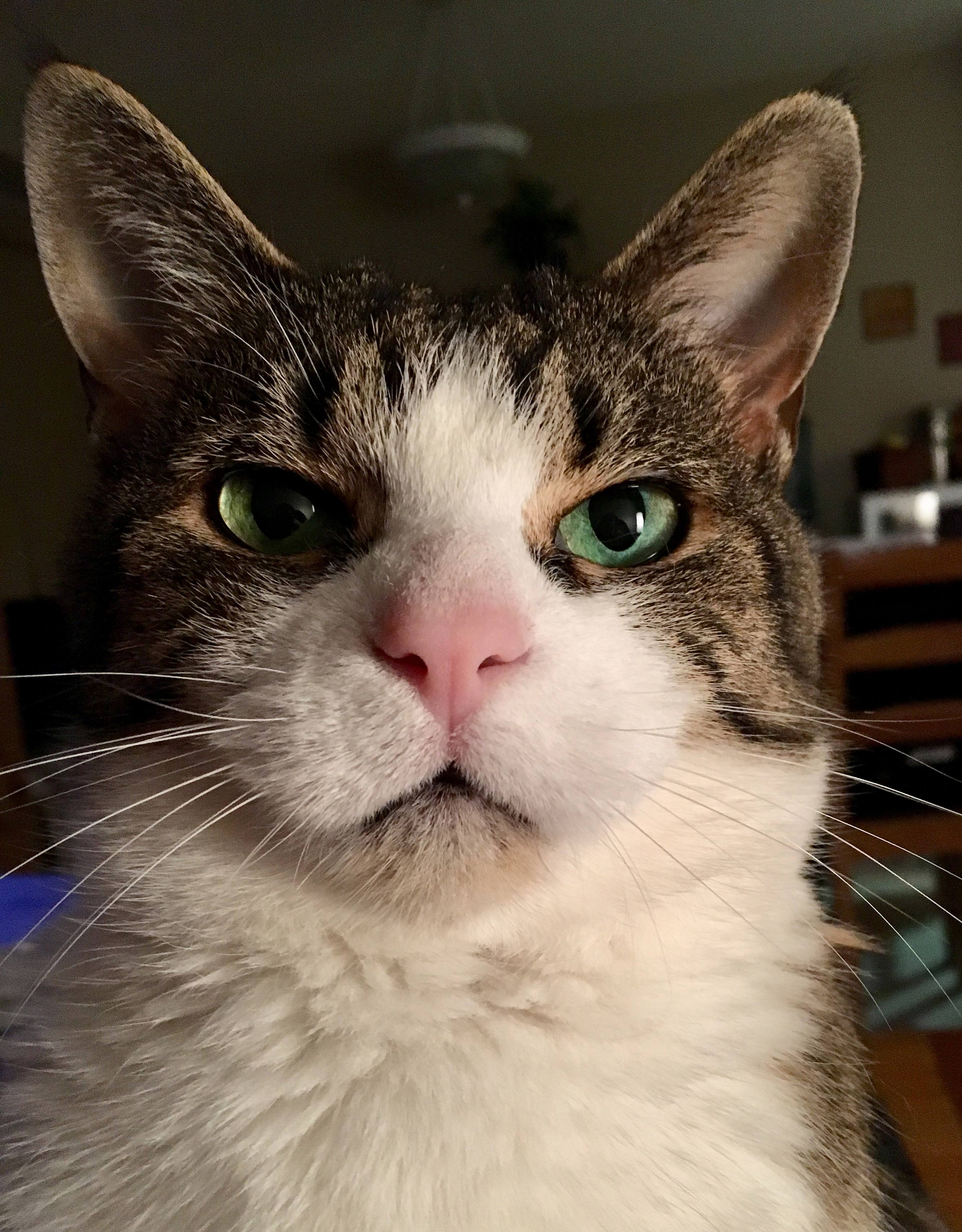 Jenny has loved animals her whole life – and has worked with both large and small animals before joining our team at Williamsburg Veterinary Hospital in 2017. She enjoys all aspects of her role as an RVT, but is especially interested in surgery and anesthesia. Jenny has a calm and caring demeanor – and is able to put even our nervous patients more at ease!

Jenny has a menagerie of pets at home including: 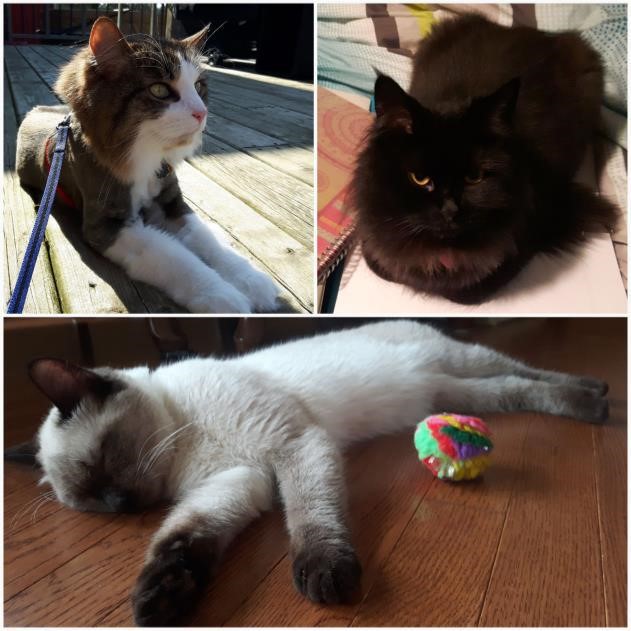 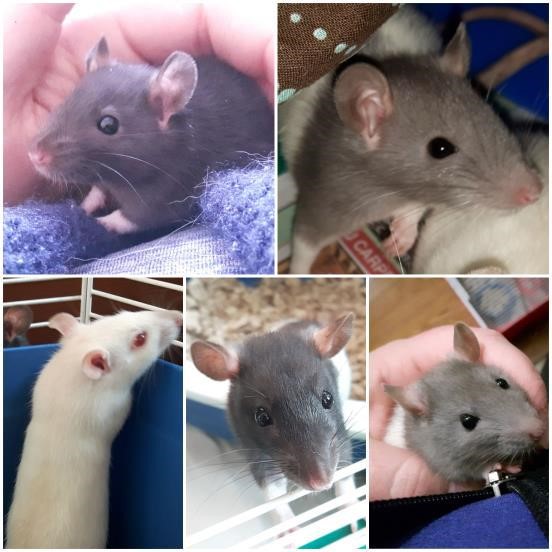 Her love of animals started at home having grown up with a variety of pets including cats, dogs, fish and hamsters. Currently the furry members of her family include:

Ruby – a not so smart but very lovable cat 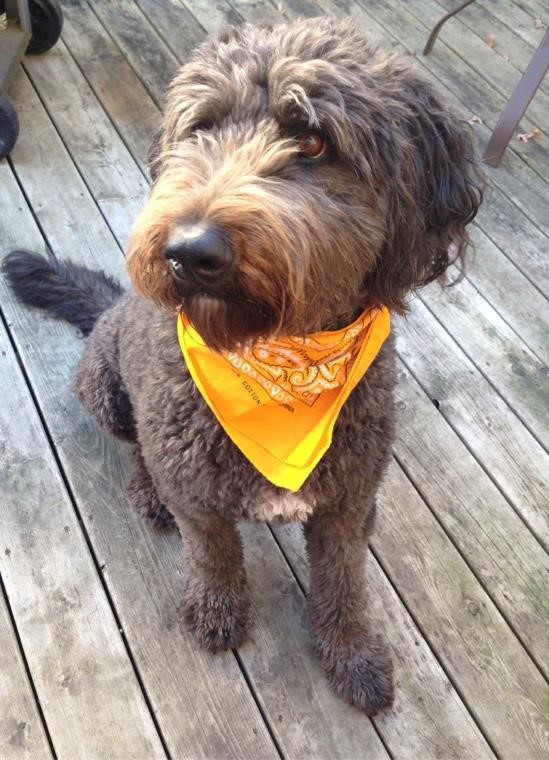 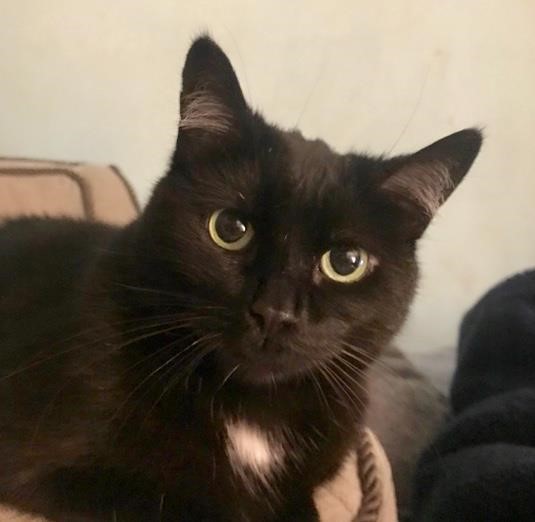 Kim joined the WVH team in 2008. She really enjoys greeting clients, especially if they bring in puppies and kittens! She is our resident “neat freak” and is great at keeping the hospital environment clean and tidy. Kim just loves chatting with our clients and we all enjoy hearing her laughter throughout the clinic!

She has a lovely Labradoodle named Mackenzie (“Dar” for short) & a cute Bichon/Poodle cross named:

And a sweet kitty named Lacey 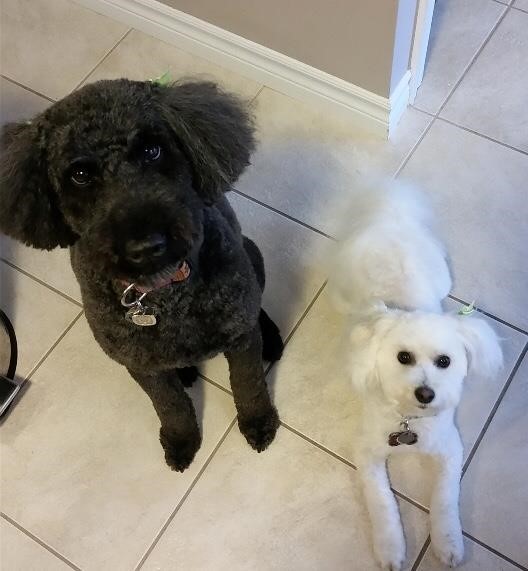 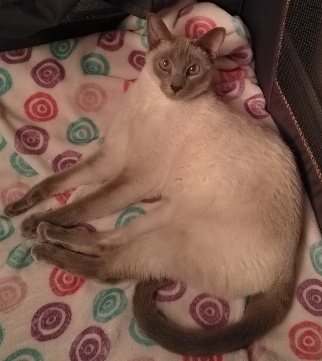 Laura joined our team in 2009. She enjoys interacting with clients, and keeping the reception area organized and running smoothly. Laura is a true “mom” and keeps a close eye on all of the staff, ensuring we are doing okay, and even providing homemade treats for our staff meetings! She takes a special interest in our clinic cats Lou Lou & Misha and was especially close to our dear clinic kitty Josie who passed away in 2012.

She has two beautiful cats, Holly and Belle

Andrea started at WVH in 2016 as a volunteer, but soon joined our team as a Receptionist/Veterinary Assistant. She graduated from the University of Guelph with a BSc in Animal Biology and is pursuing her education in veterinary medicine. Andrea has a special interest in surgery and loves constantly learning from the doctors here at Williamsburg Veterinary Hospital.

She shares her home with: 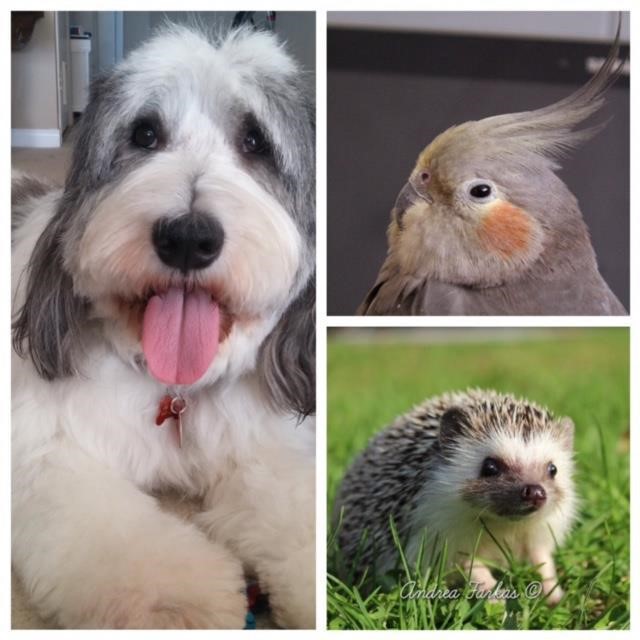 Cathie has worked at veterinary hospitals for many years. She initially volunteered at Williamsburg Veterinary Hospital when we opened in 2005, and then was offered an official position in 2007. Known as the resident “cat whisperer,” she is renowned for her calming effect on our unhappy feline visitors.

Millie – who enjoys helping with puzzles

…and Tetley – who has no respect for anyone’s privacy in the tub! 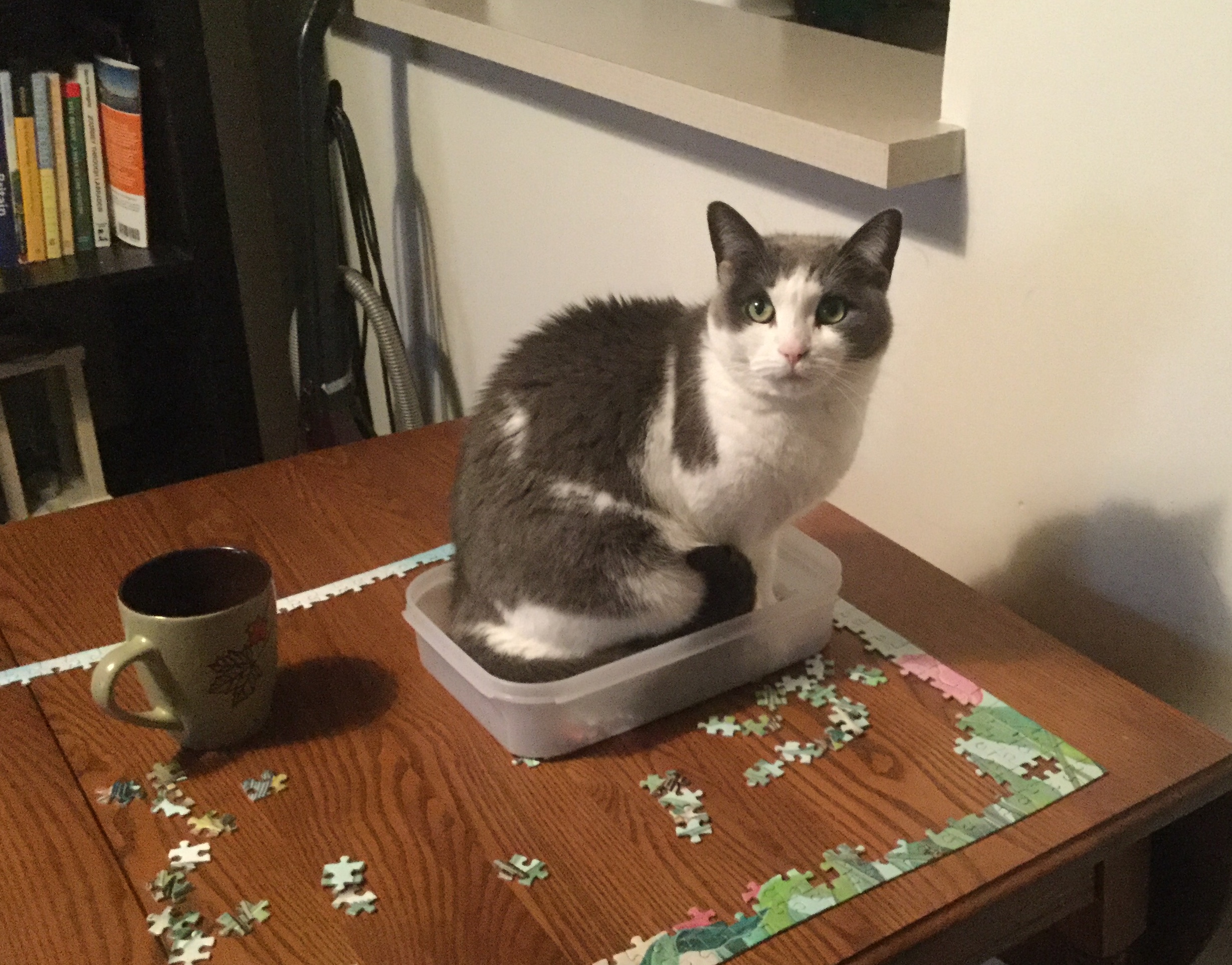 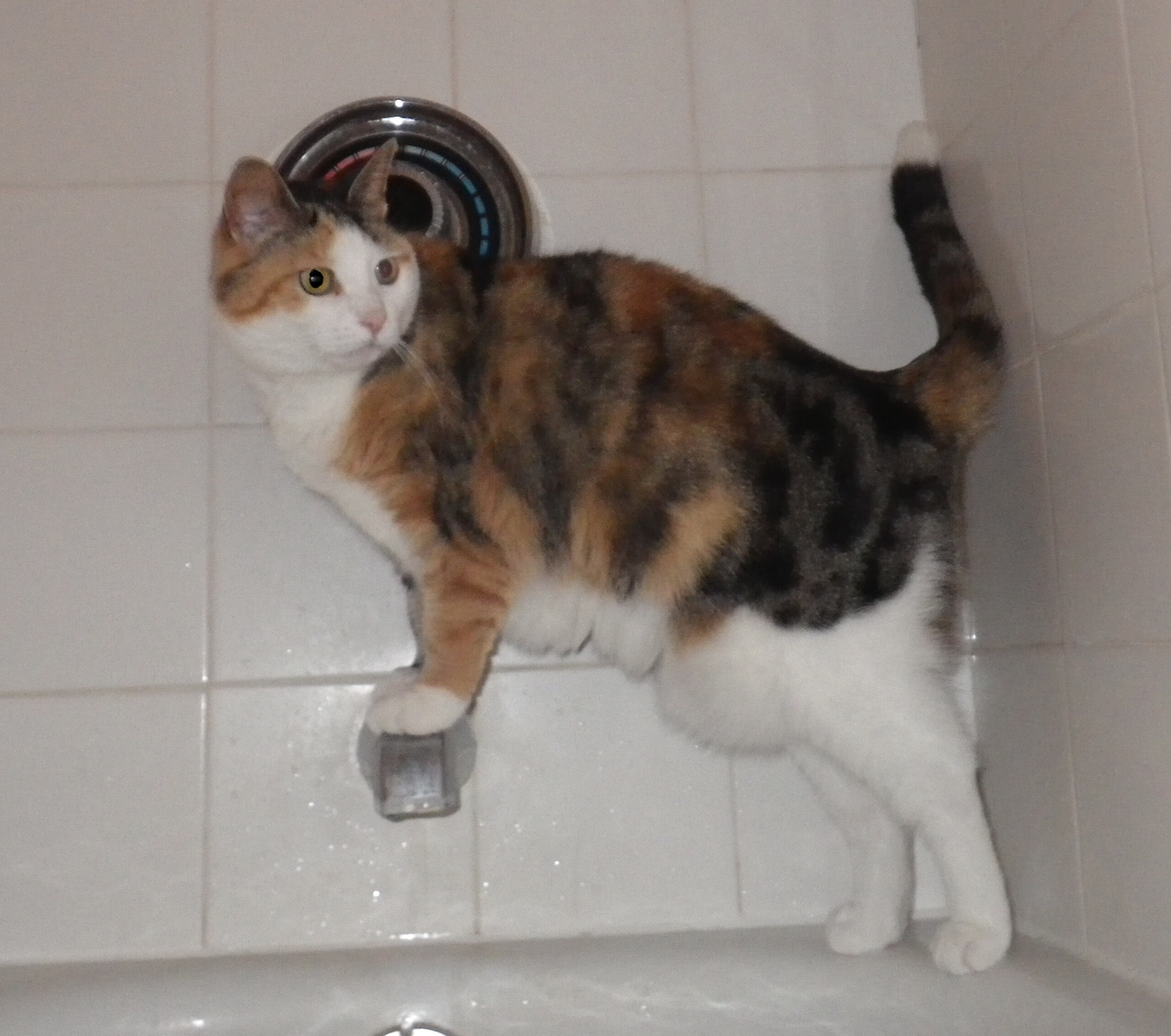 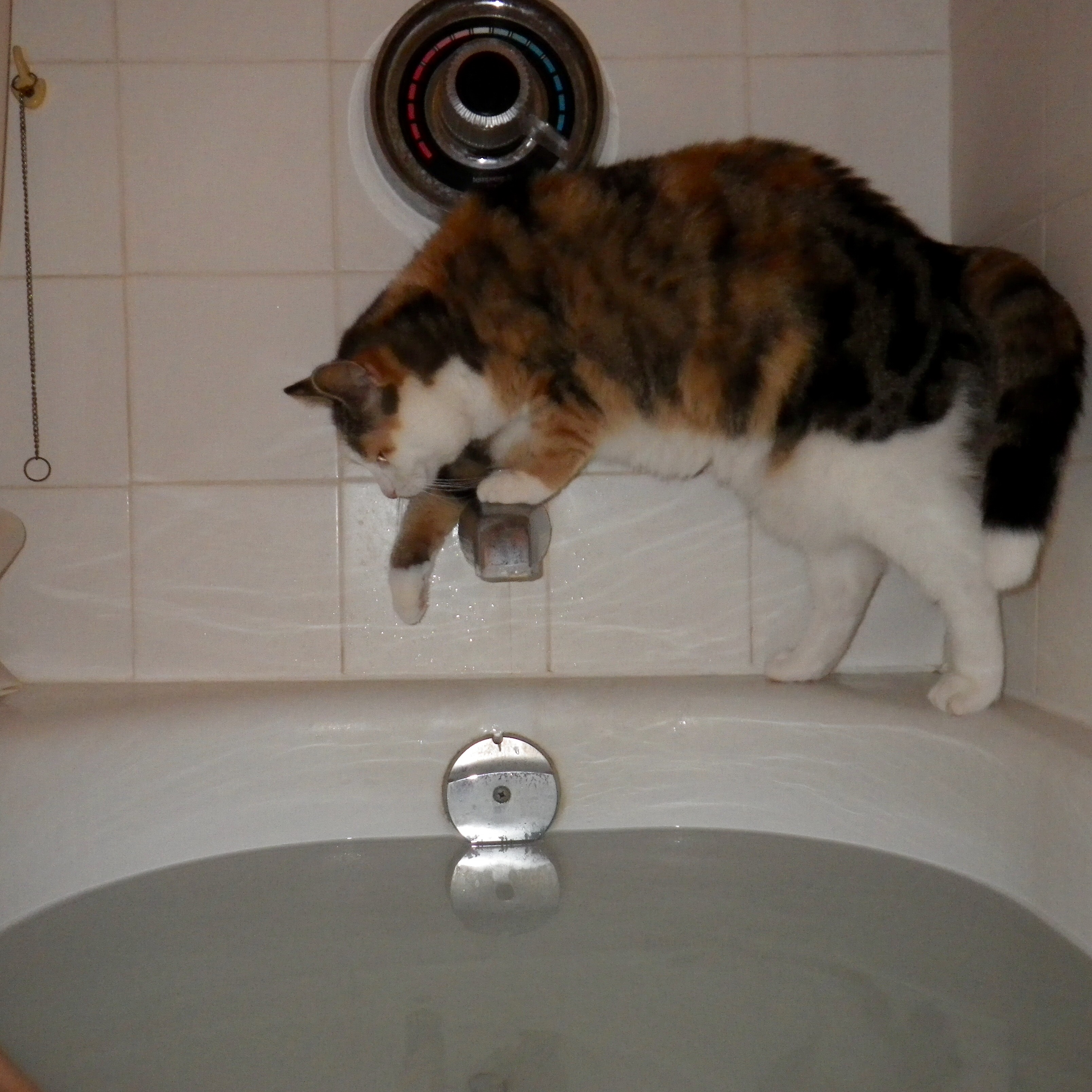 Lou Lou was surrendered to the Williamsburg Veterinary Hospital in 2005. She quickly became an integral part of our hospital team, providing lots of purring and the occasional crazy run through the treatment area to keep us laughing. Lou Lou is a character, often cuddling up with her best buddy Adelaide (a dog), and “helping” the staff members by walking on their keyboards while they are working. Lou Lou loves dogs and kids — she will sometimes make her way to the front when she hears kids playing at our children’s table.   She is now 19 years old, so there is less running through the clinic, and more napping, but she can still get a little lively when dinner is served or it is time for a brush!

And yes, she is cross-eyed. 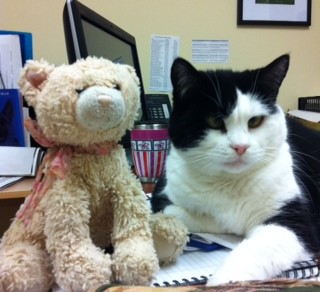 Misha was surrendered to the Williamsburg Veterinary Hospital in 2018. Our intention was to make sure she was healthy and then find her a forever home, but we all quickly fell in love with her and decided her forever home was with us!  She is quick to greet clients at the reception desk, when she is not snoozing contently on her bed or in the cat tree by the window.   Though she appears to have “resting grumpy face”, she is very sweet and loves any and all attention from visitors! 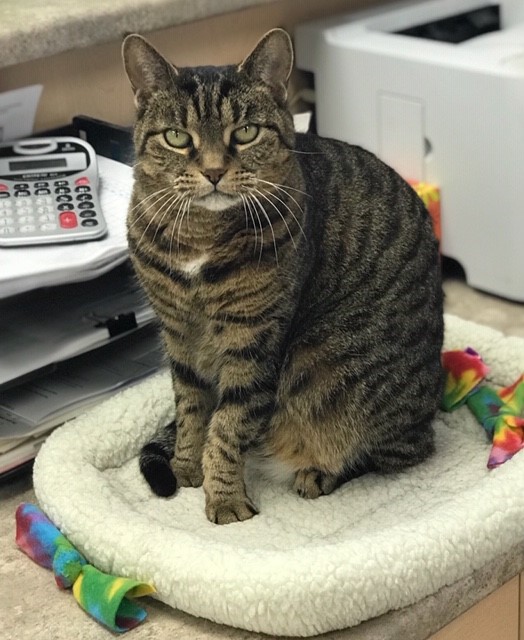 Josie was one of our clinic cats for over 4 years. Sadly, in October of 2012 she became very ill, and we had to say goodbye.

She is our “microchip failure story.” She was brought to the Williamsburg Veterinary Hospital as a stray, and as is our policy, we scanned her for a microchip. We were thrilled to see she had one, and told the Good Samaritans who brought her in that we would reunite her with her family. Unfortunately, the people who had microchipped Josie did not register their address or phone number with the microchip facility. We traced her microchip back and found that she had originally been adopted from the humane society 6 years prior at about 3 years of age. After a long, unsuccessful search for her owner, we decided that Josie could live with us.

Josie spent most of her time sleeping at the front desk or on top of the shelves in the pharmacy and became well known to our clients visiting the clinic. She was a true delight, always willing to share a purr and a head bump. She is still remembered fondly by our staff members who knew and loved her! 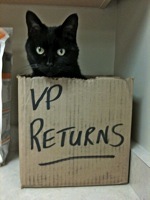 Get in Touch with Us!

We look forward to seeing you

Call Us
Email Us